- or how-to setup PAServer on Linux. 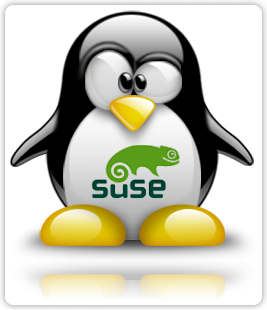 Jim McKeeth mentions in his first part of getting ready to Delphi on Linux Beta, that you can use either Red Hat/Fedora or Ubuntu - and follows up in part 2 to show how-to setup Ubuntu Server - Malcolm Groves then supplements this with the needed setup for Fedora Server.

Even if the two distributions mentioned above seems to be the officially supported - there should not be any reason for not using your AMD64/Intel64 Linux distribution of choice. Since popularity can be based on region and industry - I think it is also relevant to mention SUSE and plain Debian.

I will supplement here with the steps needed for the SUSE variants, and installation of the PAServer on Linux.
It has been many years since I last used SuSE distributions, so I might be a bit rusty on this distribution. It should also be said that it was a distribution that we were quite happy with - but we moved to distribute Cobalt Qube 3 Server appliances with a RH-based Linux distribution (and InterBase preinstalled) - and after that I have used mostly Ubuntu/Debian based.

Disclaimer: Even if SUSE Linux Enterprise Server/openSUSE is available for platforms like IBM Power, z Systems and Raspberry Pi - this post is only relevant for the AMD64/Intel 64 distributions.

Fun trivia: SUSE is today own by the same company - Micro Focus - that bought the ALM part of Borland - whereas the Developer/Database tools were aquired by Embarcadero/IDERA.

So after you have downloaded and installed your SUSE distribution - using the openSUSE Leap 42.2 net install image these couple of days - greets you with "seasonal" installer: 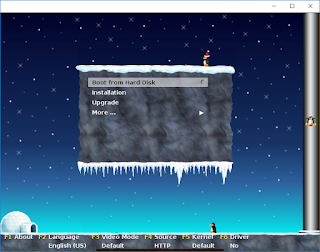 Video of openSUSE and PAServer for Linux install found here.

If you did not use a net installer image like I did - you might need to a update, upgrade and dist-upgrade cycle:

If you are a bit bothered by repeating prefixing with sudo - you can do a su - to switch to root.

After the text-only install I did in the video, you need to install the equivalent to the Ubuntu "build-essential":

Now we are mostly done - but we need to ensure one important thing - that the links to the needed libraries in the SDK are as expected from Delphi, are correct. So you need to ensure that libgcc_s.so exist in /lib64 - otherwise create a symlink to the version of the library there:

We can now install PAServer for Linux - I did that by just mounting a USB stick where I had copied "LinuxPAServer19.0.tar" from PAServer directory of my RADStudio/Delphi/C++Builder installation.

Disclaimer: I should also mention that this is prerelease beta software - that is subject to change - but I have been given permission to show the bits I showed.

In the video that is done around 5:50 into the video.

After the paserver is up running and you got the IP addr it is listening on - go into Tools|Options|SDK Manager and create a new SDK - pick 64-bit Linux, add a new profile and enter the IP address - and grab a cup of coffee. 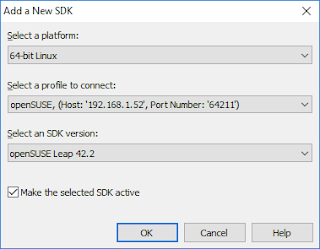 Change the Target Platform, compile and run you test console program - all done.

I did not follow all Jim suggestions, since most of the packages mention were already install during the initial OS install, but if any of them should be missing these are the SUSE equivalent commands:

and you might also want to install vsftpd to get some specific data moved over - if you haven't already done that prior to get the LinuxPAServer tarball over.

Enjoy - and for the SUSE/Linux experts out there please comment, if there any better tricks - as mentioned getting a bit rusty on the distribution - so I hope I did not make a complete a.. of myself - but it worked :D
Posted by Steffen Nyeland at 19:32