- or an unofficial temporary fix to the documentation tab in RAD Studio 10.2.2. 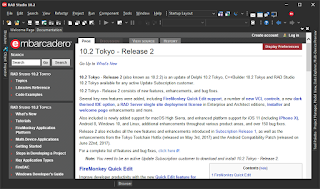 There is a lot of things that are fixed in update release 2 for RAD Studio 10.2 Tokyo - but one thing that is broken - and which is not crucial, but just a plain stupid oversight before RTM - is the documentation tab in the IDE.

The HTML page on the tab is only shown as a column aligned to the left that takes up approx. 1/5 of the client area width.

Not being a HTML expert by any means, I still tried my luck.

So in the installation directory's Welcomepage folder of your RADStudio 10.2.2 - default is C:\Program Files (x86)\Embarcadero\Studio\19.0\Welcomepage you will find the file documentation.htm which needs to edited together with at least the one in the sub-folder that matches the language you run your IDE in. Actually the one in the <language> sub-folder should be sufficient.

You might need to move the files to somewhere else to be able to edit them, due to "Windows user rights tyranny" :)

Update: Afterwards I also found another solution in the "old" forums at: https://forums.embarcadero.com/thread.jspa?threadID=271798 where Rikard Johansson suggests a change in the SetFrameURL functions.

I think mine scales better when resizing the IDE, but Rikard probably knows what he is doing - me not being a HTML expert :)

Update 2: Karlheinz Jansen pointed me to the Quality Portal entry: https://quality.embarcadero.com/browse/RSP-19521 - that suggest to replace the none existing styles.css with the styles_light.css. I did actually change mine to the provided styles_dark.css guessing that would be the intention when running Dark Themed IDE.

There will surely be a correct official fix for this some, but hopefully EMBT prioritizes eventual critical bugs first - and not a glitch like this first. And visually the